The purpose of a model release form is to protect the publisher
or user of a photograph against claims for damages such as
invasion of privacy and/or defamation.

The photographer (or videographer etc.) has the ideal opportunity to get photo release forms signed after a shoot (or video recording) and having a signed agreement in place, can mean the difference between the sale or not of a photograph or video. 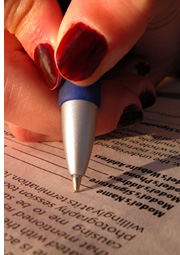 The free model release form on this page is for adults and covers the use of sound also.

For your own record keeping, attach a sheet with thumbnails to the relevant model release form - see further down for links. You could (should) also make a copy of the Model's identification document as proof of age and attach it to your photo release.

The parties to this release agreement are:

(Hereinafter referred to as "the Model")

(Hereinafter referred to as "the Photographer")

Whereas for valuable consideration hereby acknowledged as received, the Model granted the Photographer permission to photograph and/or film and sound record the Model and furthermore grant permission to use the resulting work ("the Work") according to the terms stated hereunder:

1.    Any permission granted to the Photographer shall extend to his/her successors, legal representatives, licensees and assigns and shall be irrevocable and perpetual without any further or additional claim for compensation by the Model.

2.    Use of the Work shall be unrestricted as to location, quantity or frequency, may be for any purpose and in any medium whatsoever, whether foreseen or unforeseen at this time, except where such use is in contravention of the law.

3.    Permission is specifically granted for the Work to be edited, altered, distorted, used in whole or in part, in conjunction with other images, graphics, text and sound in any way whatsoever and without restrictions.

4.    Permission herein granted is absolute and final and shall not be subject to further inspection or approval by the Model at any stage in the use of the Work.

5.    Use of the Work may be in conjunction with the Model's own or fictitious names.

6.    The Photographer shall own all rights in the Work which shall accrue to the benefit of his/her successors, legal representatives and assigns.

7.    Notwithstanding the above, the following uses are specifically noted and agreed to and specific exclusions for use listed here shall take precedence and restrict the use of the Work accordingly:

8.    The Model warrants having read and understood this Model Release Agreement and warrants being of full legal age to enter into an agreement.

9.    With full knowledge of the above, the Model hereby releases and shall hold harmless the Photographer and his/her successors, legal representatives, licensees and assigns from all claims or damages including but not limited to defamation or violation of right of privacy or publicity, resulting from or associated with the use of the Work.

10.    The Model agrees that the provisions contained herein shall be binding upon the Model and his/her successors, legal representatives and assigns.

11. This Agreement shall be construed, interpreted and governed in accordance with the laws of the State of ___________ and should any provision of this Agreement be judged by an appropriate court as invalid, it shall not affect any of the remaining provisions whatsoever.

12.    The parties agree that any or all parts of this agreement may be submitted to the other party in legible and recordable electronic form and upon acknowledgement of receipt by the receiving party shall become valid parts of the agreement.

Note: In paragraph 7. of the above model release form we provide space where sensitive issues can be addressed, specific locations / countries can be excluded or uses may be excluded.

For example: A Model may stipulate that his/her image may never be used in conjunction with alcohol. Similarly, if the Photographer intends to use the image in a campaign against women's abuse (a sensitive issue) for example, that should be noted too. Both Photographer and Model must initial where any additions or alterations are made by hand.

Why Do You Need a Model Release Form

Because there's no downside really, there are so many grey areas and it's better to be safe than sorry.

Not all states or countries have the same rules either, making it even more difficult to know if/when you need a signed model release form.

It also serves as protection for a model when a photographer clearly states that the images are solely to be used for his/her portfolio. In this instance the model grants the photographer permission to take and possess photos, but not to use it in any other manner.

Generally speaking you do not need a model release for editorial or artistic purposes or for images taken in a public space such as a market or on a public beach.

If it's not possible to get a release or you are in any doubt about your use of the image, then talk to a lawyer!

Even if a model does not get paid or the images are used for non-commercial purposes, the moment there may be a perception that the model endorses a service or is promoting an organization, you need a model release.

This falls under the right of publicity and an individual's exclusive right to license the use of his/her likeness for commercial purpose.

The model release form and other free legal forms on this site are provided for informational purposes only and do not constitute legal advice. You need to consult with an attorney to ensure your documents comply with the legal requirements in your jurisdiction.