There is no getting away from paying franchise royalties when buying a franchise.

The very reason for an entrepreneur to buy into a franchise is to get a kick-start and ongoing support for his business, which obviously comes at a price in the form of royalties. 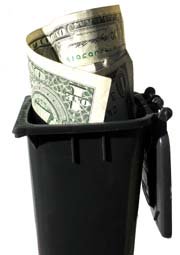 Franchisees are initially quite prepared to pay royalties but once the business is established the ongoing payment of franchise royalties may be perceived as an unnecessary expense.

Either way, the royalty fee is a given in the franchise environment and the franchisee should remind himself that the success of his business can to a large extent be attributed to the strength of the brand (to which he is contributing).

Resentment to pay franchise royalties are mostly the result of franchisors failing to deliver on their promises, misrepresentation or failing to meet their obligations.

Sidebar: If you are planning to franchise your business, you will do well to under-promise and over-deliver to your franchisees. Helping them to succeed at their business without trying to make a buck out of new ideas, promotions or add-ons that you may come up with, will ultimately reap its reward in satisfied, loyal franchisees who will encourage others into buying a franchise.


The Various Ways to Calculate Royalties

Royalties and or advertising contributions for a franchise can be either a monthly fixed fee (escalating annually) or calculated as a percentage of gross turnover (excluding taxes such as Value Added Tax).

Fixed Fees: - The advantage with paying fixed franchise royalties, is that the small business franchise can do its budgeting annually, knowing exactly how much it is liable for and should the business show good growth, it will not have to increase the monthly payments.

The disadvantage will mostly be experienced during the early days of trading before the small business franchise becomes established.

The franchisor may argue that if the business is making more money, it should be able to afford the higher royalties, but somehow human nature is such that the franchisee feels the credit is all his.

The percentage of turnover may typically be structured on a scale - example 8% on the first 100k, 5% on the next 100k and 3% on the remainder (and many variations thereof).

The franchisor will want the franchisee to trade his business the optimum hours possible in order to increase the turnover. Breach of trading hours as per the franchise agreement may incur penalties or even termination of a franchise.

Franchisors will generally favor the percentage of turnover option. They will be prepared to accept a lower initial franchise fee with the hope of the business growing into a larger turnover and therefore a bigger royalty payment. And if the business is marginal, they may have problems getting even the fixed fee out of the franchisee anyway.

A Combination of the above: - Perhaps a combination of the two can benefit both parties. Start with a percentage fee for a limited time period (say six months), thereafter charge a higher fixed fee. (If you are considering your options because you want to franchise your business, it can show that you are putting your money where your mouth is).

To buy into the franchise will incur the initial Franchise Fee. This buys the franchisee the training, proprietary software and manuals to operate the business. This is typically a once-off fee for the duration of the agreement. Upon renewal there may be a renewal fee payable.

There may also be other monthly fees such as a marketing contribution payable for national advertising, software support fees, ongoing training for staff etc.

Refer to our main franchise consulting page for more information on:

Small Business Franchise - What to look out for

Buying a Franchise - The Territory and Location

How to Franchise your Business

Finding the Most Profitable Franchise

Termination of a Franchise and Restraint of Trade

Note: Before entering into a franchise agreement and committing to paying franchise royalties, the prospective franchisee must question the franchisor as to the ongoing support and services he can expect to receive.